Perhaps the best thing about the Hotel Labelle Rome is our location. One could not be in a more central location of historic Rome. It is not just our proximity to the ancient sites, but also our position for restaurants, bars, shops and access to the public transport network. We truly have it all….

Within just 2 minutes, guests can walk to the ancient Imperial Roman Forum – from where much of the known world was administered 2000 years ago – and marvel at the history and landmarks of the ancient Roman Empire. Just a few minutes more and guests can gaze up at the awe inspiring Coliseum – the classic icon of Rome. The Capitoline hill with its fascinating museums and galleries also lies just behind the Forum where guests can gorge on art and culture.

In the other direction, guests can venture into the charming and ancient district of Monti where Julius Caesar was born. Although it still retains it's ancient charm with quaint narrow cobbled streets and typically Italian atmosphere, today this environment has also fused with the trendy modern Rome with Monti being widely recognised as one of Rome's best districts. Chic boutiques, traditional restaurants and trendy bars are also interspersed with private art galleries and interesting bistros.

If guests continue just a little further they can also find themselves at the ancient golden Basilica of Santa Maria Maggiore, the large shopping streets of Via Nazionale, Via del Corso or even the spectacular Trevi Fountain which is particularly stunning when viewed lit at night.

As if all this wasn't enough, guests are only around 5 minutes' stroll away from the Coliseum or Cavour metro stations on Line B which means that you can reach all of the city's main tourist attractions with the minimum of hassle and time. Take a look below for an appreciation of just how central we are… 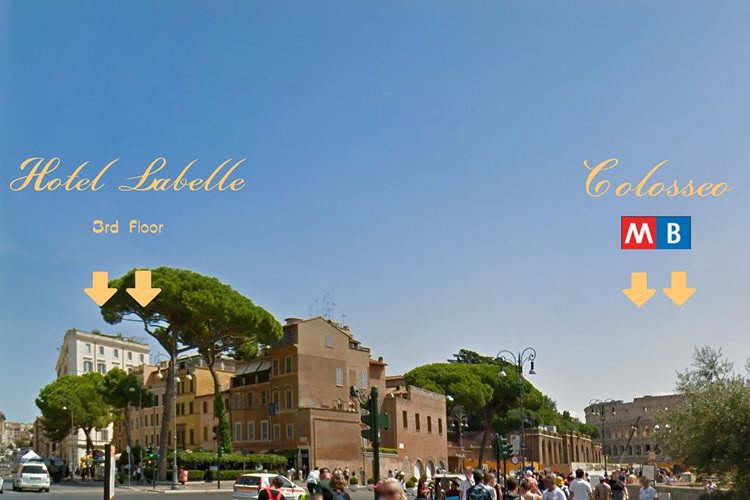 How To Reach Us:

Book the transfer through our concierge service, at info@hotellabelle.it

Express train from Fiumicino airport to Roma Termini station only, from where you can take the subway line B direction Laurentina stop Cavour.

Bus from Ciampino airport and Fiumicino airport to Roma Termini train station, from where you can take the subway line B direction Laurentina stop Cavour.

By Underground Metro
from Colosseo Station

Visit our Rooms & Services page and Photo Gallery page to also understand how relaxing and great value for money our rooms are and once completely satisfied, use our online booking system to book a place today whilst you still can !

Why book with us: